skip to main | skip to sidebar

For some 1300 years Christians have come Sunday and weekdays to worship the Lord God and to celebrate major points of their lives in his presence. We recall dates, from Priests and Vicars, Eras long gone by and changes in our church life. We picture the past. We see the present. We look at for eternity. The Greek word Church (ekklesia) means as assembly of citizens (literally 'called out.') For Christians the word Church means citizens of earth called out to be citizens of heaven. These citizens of heavne while on earth need shelter from heat and cold so the protecting building where they meet is named after them - Church. This particular place is where varying stages of our Faith have their beginnings within the family of God In the Font (fountain) Baptisms take place. We wash away the power of evil and put on Christ himself. At the entrance to the Chancel - here at the steps we are Confirmed in Faith by the Bishop. At the same place men and women are joined in Christian marriage. Before the steps the coffin is placed in sure and certain hope of the life of the world to come. Here is the Prayer Desk where Penitence, Intercession and praise are led. The Ministry of the Word flanks this spot - The lectern from which the bible is read aloud and the Pulpit, from which God's word is explained. The Altar is at the east end of the building, for Christ is the day of Righteousness. Here is the Lord's Table where the Church celebrates Jesus' command to "do this in rememberance of me." Christ has died. Christ has risen. Christ will come again.

St. Aidan first Bishop and Abbot of Lindisfarne died beside the little wooden Church at Bamburgh on 31st of August 651. and on the same night a young man with a the family of sheep on the Lammermuir Hills sees with the eyes of the Spirit a holy soul going up to Heaven in the hand's of angels.
That young man was (St.) Cuthbert, who learning that Aidan had died, immeditely went off to the Aiden - founded Monastery at (Old) Melrose, gave up his horse and spear to his servant and submitted himself to the Prior, St. Boisil as a novice in the community. Cuthbert was drawn by the holy zeal of Boisil and in the years to come often took Cuthbert as his companion when he journeyed into the surrounding hillcountry to proclaim Christ, sometimes staying in the half-Christian hamlets for three weeks at a time.
In 658 Boisil became Abbot but in 661 the Monastery was struck by the plague. Boisil and Cuthbert were both ill. The first died and the other recovered. During Boisil's last week the two read through the Gospel of St. John together for their mutual encouragement.
Cuthbert became the Prior and then in 664 Prior at Lindisfarne and eventually Bishop in 685.
Churches were named after Boisil and St. Boswell and Lessuden, both near Melrose and at Tweedmouth. Probably Cuthbert had come with his prior Boisil to the little fishing hamlet of "Tweedmouth" where they set up a wooden cross. Twenty years later Bishop Cuthbert named a small wooden Church in memory of that visit with his old master.
Historians consider that if an ancient Church bears the non Scriptual name of someone active in that area at an early date then there is strong probability that Christianity was first proclaimed there by the person named or some immediate follower.
The first written reference to our Church is in a confirmatory papal document dated 1145 concerning "the Church of Bosilius at Tweedmouth."
A 'confirmation' is a written testimony to what existed before. From this we knew that there was a Church building in Tweedmouth prior to 1145.
Much later, in the time if the Stuarts, the dedication name seems to have dropped out of use and our Church is reffered to as "Tweedmouth Chapel" being of the four Chapelries owing tithe to Holy Island since Norman times. The others were: Ancroft, Lowick and Kyloe.
In the early years of Queen Victoria, old things were revived and Tweedmouth Church became known as St. Bartholomew. The reasons for this are in the Norman history of the Parish and in fact until 1867 Spittal was part of the parish of Tweedmouth.

In Spittal a leper hospital (refuge) which was named after the Apostle Bartholomew, possibly because it's Chapel was consecrated on the Apostles feast day 24th August. It existed before 1234. Spittal derives it's name from ho-spital, as do many localities elsewhere, from some long dissapeared medieval refuge for the sick. The 'Spittal' stood on the site of the bungalows Hallowstell View, occupied between times by the buldings of Spittal Hall Farm and previously by the leper hospital and the defence tower known as Bather's Tower (afer the nephew of a Bishop of Durham) he built it in 1369. The tower was still there in 1616 and dissapeared when Spittal Hall Farm buildings were erected in the late 18th century. The hospital has long gone but the name was revived during the ministry of the Rev. John Leach. (His tomb is in the railed inclosure by the tower in our Church graveyard.) Tweedmouth Church became known as St.Bartholomew rather than plain "Tweedmouth Chapel." St Boisil's name was either forgotten or thought too odd a name to use or maybe 'tainted' by the rumbustious doings of the yearly Feast Weekheld every July. Perhaps it was felt that the name of one of the Twelve Apostles was more respectable than that of an a Anglo-Saxon Abbot. An interesting thing about Tweedmouth Feast is that it opens on 18th July - yet St. Boisils Day is on the 7th July - 11 days earlier. Why is this? In 1752 England, at last, changed from the Old Style to New Style Calender to conform to European practice established in 1582. The change involved leaving out 11 days in the calender - but onlyfor the year 1752. Many people resented the change and went on as if nothing had happened, however in most places as time went by the majority fell into line. Tweedmouth feast is still unchanged and keeps the Old Style, with 11 days difference...our own date!

Home
Subscribe to: Posts (Atom)
In the following historical pictures those with a large question mark are reconstructions based upon the known history of the period and the locality. The other seven are grounded in local documents and the physical evidence, with the sources indicated briefly. 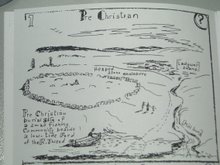 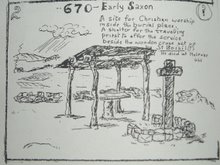 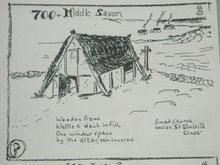 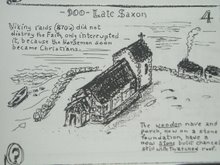 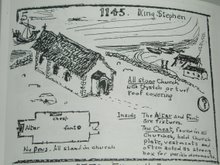 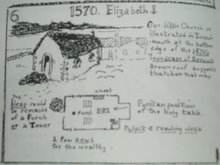 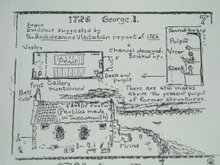 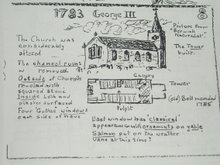 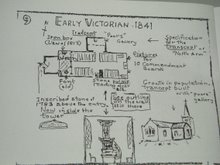 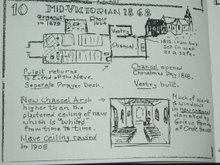 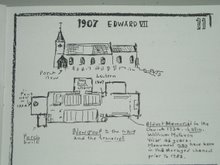 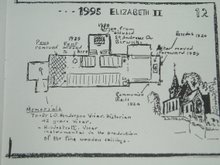